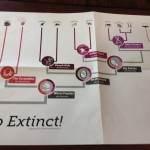 Go Extinct! is a card game that teaches children and adults the basics of our evolutionary tree. It’s like Go Fish, except that the cards represent various tetrapod species, and the “suits” are the various clades, or evolutionary groups, that each species falls into. Ariel Marcy, the creator, has done a good job with the evolutionary tree. The full evolutionary, or phylogenetic, tree is dauntingly complex. Marcy boils it down to a manageable number of groups, and she does a good job of choosing animals to represent major groups, from the mundane (such as chicken) to the obscure (such as the snakelike, amphibian caecilians). Players can see for themselves that looks can be deceiving, and two animals might look different but be closely related, or look similar but have only a distant connection.

The evolutionary tree is central to a modern understanding of animal taxonomy. Hundreds of years ago, animals were grouped together according to their characteristics, putting birds, for example, is a category separate from reptiles. Today, however, we group animals according to common descent. Birds and mammals are grouped together with reptiles in the “amniote” clade. Marcy calls this large clade the “shell shockers” because we’re the tetrapods that evolved eggs that could survive on land. While many of these clades have intimidating scientific names, such as “Laurasiatherian,” Marcy has given them all kid-friendly names that point to the animals’ evolution. She uses the term “North Siders” for Laurasiatherians, such as lions and whales, because they evolved in the northern continent of Laurasia.

The phylogenetic tree expresses the modern way of understanding relationships among organisms, living and extinct. Go Extinct! is a fun way for people to interact with the tree and get comfortable with it. Please consider backing Marcy’s Kickstarter campaign, which you can find right here. Her Kickstarter ends on May 31st, so don’t delay.