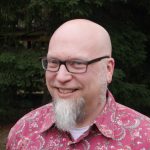 Jonathan Tweet has been an innovative game designer for over 25 years and a fan of evolution for even longer. When his daughter was a pre-schooler, he started working on a story that could teach evolution to a child that young. When she was in college, he finally got it right. Grandmother Fish is his first children’s book. He has also puzzled for years on how to do an evolution-themed game that got the science right, and Clades is his answer. 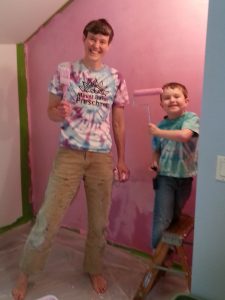 Karen Lewis is a Seattle-based illustrator for children’s storybooks, history, and science. She strives to make her art accessible, accurate and visually delicious. Favorite clients have included the Point Defiance Zoo and Aquarium, the Seattle Aquarium, Seattle Art Museum, Seattle Public Schools, Seattle Public Utilities, KCTS public television, King County and the National Science Foundation. She’s the resident cartoonist for Cobblestone, an American history magazine for kids. Her children’s books include Will it Blow – Become a Volcano Detective at Mount St. Helens, Amazing Alaska and Arturo and the Navidad Birds.

Here is Jonathan’s story of working with Karen, with illustrations.

Karen and I are available for author and artist visits, either together or independently. Please contact us through our online contact form, here.

Here are Karen and I at the Science March: Seattle. My topic is evidence and how it can unite us.  That’s a coral reef on Karen’s head.

“The thing you have to know about Jonathan is that he is one of those rare individuals who combines extraordinary intelligence with an amazing sense of humor and an ability to share his passions so engagingly that you cannot help but find yourself as interested in a topic as he is.  If someone asked me to describe the perfect person to create an engaging book about a complex topic like evolution for kids, Jonathan Tweet would be the first person I would nominate to do the work.”
—Ryan S. Dancey, game publishing executive, brand manager for Dungeons & Dragons 3rd Edition

“Jonathan Tweet knows what it takes to win games, and he’s tackled one of the toughest challenges here: creationist denial of the facts of evolution. With Grandmother Fish the score is: Tweet 1, Ignorance 0.”
—Mike Selinker, designer, Pathfinder Adventure Card Game; author, The Maze of Games

“Jonathan’s a great writer, and particularly good at taking challenging concepts and making them understandable and accessible to the audience he’s aiming at.”
—Monte Cook, game designer, publisher at Monte Cook Games

“I have known Jonathan since the early days of Wizards of the Coast and have always been entranced by the breadth and intensity of his interests. If you were to tell me that someone I knew was going to write a book on evolution for children I would know in my gut it was Jonathan, and I would know it was going to be excellent.”
—Richard Garfield, game designer, creator of Magic: the Gathering