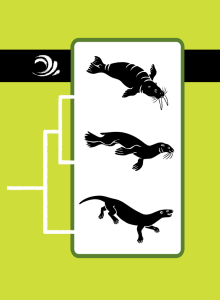 The prehistoric mammals of the water are pinnipeds (“fin foots”): the walrus-like Valenictus; the seal-like Enaliarctos; and the otter-like Puijila. Valenictus lived around 5 Mya, and it had no teeth other than its tusks. It evidently ate mollusks, like modern walruses do, rather than fish, as the earliest pinnipeds did. Enaliarctos (“Arctic sea bear”) lived around 20 Mya. It caught fish but took them back to land to eat them, rather than eating them in the water as modern seals do. Puijila (“young seal”) looked like an otter but is more closely related to seals. Charles Darwin speculated that a land-living, fish-hunting species could evolve into an aquatic species as they spent more and more time in the water, and the Pujila fossils provide strong evidence for just this process.