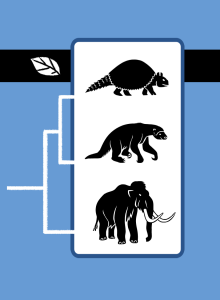 The prehistoric mammals of the land are two xenarthrans (“strange joints”) and an afrothere (“Africa beast”). The xenarthrans are a glyptodont and a ground sloth, while the afrothere is a mammoth. Glyptodonts (“carved tooth”) were giant armadillos that arose about 20 Mya. Their armor protected them from giant flightless birds and other predators. Ground sloths evolved great size to protect themselves from most predators. They appeared about 35 Mya. Sloths are closely related to anteaters. Like all xenarthrans, they have long, clawed toes and low body temperatures. Xenarthrans evolved in South American after it split from Africa, and they spread to North America when the two land masses connected to each other 3 Mya. Afrotheres evolved in Africa when it was separate from the other land masses, leading to aardvarks, shrew-like tenrecs, manatees, and elephants. Elephants later spread into Asia, and mammoths reached North America. Glyptodonts, ground sloths, and mammoths died out with the end of the last ice age and the arrival of human hunters. Xenarthra and Afrotheria diverged from the other placental mammals long ago in the Mesozoic. Their ancestors either split off separately but at nearly the same time or they split off together and then diverged from each other soon afterwards.