This post provides online resources for fans of evolution for kids, parents, and educators. 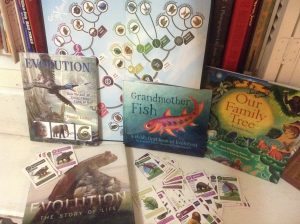 When I was working on Grandmother Fish, I naturally looked around for other evolution resources that were already available.

Evolution: How We and All Living Things Came to Be, by Daniel Loxton. Ages 8–13.

Great book on the science of evolution. Loxton did the art as well as the text, so it all works together beautifully. Covers answers to common misconceptions and arguments against evolution.

Evolution: The Story of Life, by Douglas Palmer. High school to adult.

The sheer scope of this book makes it a must-have. Spread after spread is a full-color scene from prehistory, from the earliest suggestions of life to prehistoric humans. Page after page, you see the history of life on earth play out. It gave me a greater appreciation for the vast diversity of living things over the last billion years. The art isn’t flashy, but it’s effective, and there’s an insane amount of it. The writing is dense, and there’s nothing kiddie about the book, but it’s filled with illustrations and photos that kids would love to pore over. Best yet, in the US you can buy this $48 book used for under $10, including shipping.

This sweet picture book is a lot like Grandmother Fish, but for older kids and with more detail. It recounts our lineage starting with the origin of life itself. Science notes in the back provide a context for the lyrical story. It’s high on folks’ lists of good evolution books.

How How the Dormacks Evolved Longer Backs,
How the Piloses Evolved Skinny Noses,
Evolving Minds Project.

These fictional books explain natural selection and are free to elementary teachers in the US. Click here to learn more. Funded by the National Science Foundation

Illustrated poems describe ten evolutionary findings or concepts. After each poem is a description of the scientific work that it’s based on and the evolutionary scientist involved in that work. The one about the emotional connections among early humans is especially cute, and this poem’s art is also especially cute. Kids love illustrations of happy families. The rhyming nature of the stories means you can read them to younger kids.

This card game is a variant on Go Fish uses our evolutionary family tree. Two hundred years ago, animals were categorized into broad groups, such as “reptile” or “bird.” Today we place each species on a continuously forking evolutionary line of descent, with each species related to the others according to what forks they share. The phylogenetic tree, as it’s called, is like the periodic table of elements except for species. And since it reflects evolutionary history, it’s complex and disorderly. Getting kids to play a game that familiarizes them with the evolutionary tree of life seems like a great way to get them thinking in evolutionary terms. There’s phylogenetic tree in Grandmother Fish, and kids respond strongly to it.

This academic site is where you turn for expert opinion. If you want to know what your kids should know about evolution at each age, this site will tell you. It includes links to all sorts of resources about evolution. A project of the University of California Museum of Paleontology and the National Center for Science Education.

This organization promotes greater understanding of evolution and climate change. It’s a fine advocacy site for adults, and it has plenty of resources for kids, too. They were a big help with Grandmother Fish.

PBS is great for science and has an evolution site.
Here’s a high-school-level video that explains natural selection.
The Nova site has its own evolution page.

How to Teach Natural Selection to Children

Natural selection can be hard to understand because it doesn’t match human expectations of how things work. These notes are designed to help a layperson, especially a parent, explain natural selection to a child. Elaborate each point at your child’s level, and explain it a little at a time. A version of these guidelines appears in Grandmother Fish.

These notes are also available as a 1-page PDF (click here).

You might also be able to point out examples in your family of heredity and diversity.

Baby animals grow up to be a lot like their moms and dads.

A puppy grows up to be a dog, not a cat or a fish.

Babies grow up to be a little different from their parents.

Over time, the differences add up, so animals today look very different from the mom animals and dad animals from a long time ago.

You can also use other examples besides dogs

Dogs look different from how dogs used to look a long time ago.

After a long time, their dogs were bigger than before.

Other people got different kinds of dogs, like small dogs or fluffy dogs.

All the different kinds of dogs come from one kind of dog that lived a long time ago.

Natural selection works because some individuals leave many more surviving offspring than others do, who may die before reproducing or have few descendants for other reasons. These guidelines hint at death but don’t mention it. Address the topic in ways suitable to your children.

Living in nature is dangerous for animals.

Animals have ways to keep themselves safe.

Baby animals are born with differences, and some differences make them safer.

Animals that keep themselves safer have more babies.

A long time ago, one group of animals climbed trees to be safer, and the best climbers were the safest.

The best climbers had the most babies, who were also good climbers.

After a long time, these animals had evolved into animals that were really good at climbing trees.

In different parts of the world, animals found different ways to be safe, so they evolved into different kinds of animals.

For example, one sort of animal from a long time ago evolved into the lions, tigers, wolves, foxes and bears that are alive today. 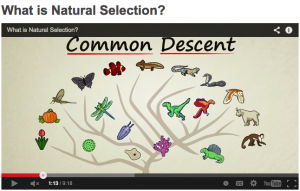