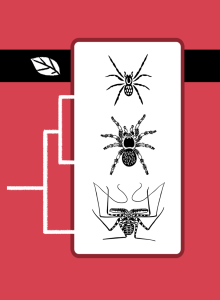 In the Clades game, the arthropods of the land are represented by tetrapulmonates (“four-lungs”), specifically an orb-weaver spider, a tarantula, and an amblypygid. Tetrapulmonates evolved from one line of trigonotarbids, the first arachnids adapted to air-breathing (about 400 million years ago). Orb-weaver spiders and their relatives compose most of Earth’s spiders. They have fangs that point toward each other like pincers, and their ability to capture winged insects in their webs has helped them spread across the globe. Tarantulas and their relatives have fangs that point down, which makes for a weaker “bite”. These spiders create silk but don’t weave webs. Also descended from trigonotarbids are the spider-like amblypygids, whose front legs have evolved into long feelers. These feelers are similar to the antennae that pancrustaceans have, including insects, but obviously they evolved separately. Many types of animals have evolved new uses for their front legs other than walking. What other animals can you think of that have limbs that used to be legs but that aren’t any more? 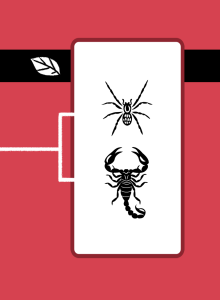 Spiders and scorpions are descended from water-breathing ancestors, not air-breathers.

When I first chose animals for the “land arthropod” card, they were a spider, a scorpion, and a tick—all land animals. Then I learned that the most recent common ancestor of these three groups lived in the water. The lines that led to today’s land-loving spiders and scorpions evolved air-breathing independently. I switched from the arachnid clade to the tetrapulmonate clade because in Clades it’s the most recent common ancestor that determines a card’s environment (water, land, or air).

US preorders are now available from the game’s future publisher, Atlas Games, for both Clades and Clades: Prehistoric. Preorder here.